A day before the grand event that is Anime Festival Asia 08, I was invited to the press conference where we got a sneak preview of the convention. We had a chance to see the 5 guests that have travelled all the way from Japan to make a special appearance at AFA08.

This entrance is pretty obvious...

So, I arrived at Suntec City pretty early, at around 2.00 pm. The place was extremely quiet. Definitely a stark contrast to what it will be like tomorrow.

Many people were there still preparing things for tomorrow and setting up lots of stuff. These people are the ‘backroom’ boys that hardly get any credit. You’ll see many of them in the following picutres. Hats off to you guys who make such a great event possible. 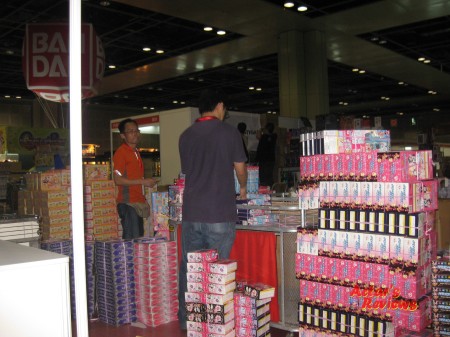 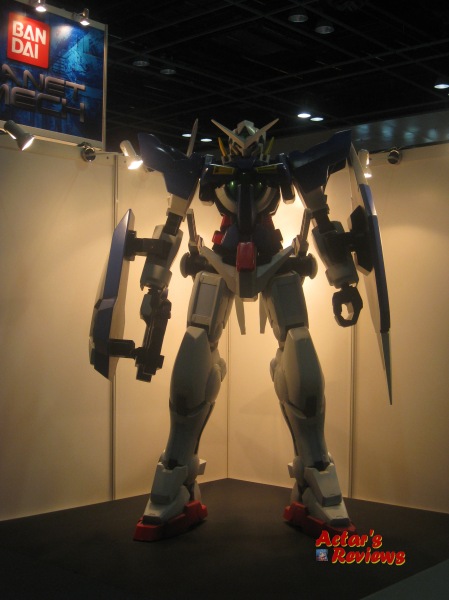 Enough of the quotes. These are just a couple of the things that first greet you when you first set foot into convention halls 403/404. For those of you who have not been to many conventions like me, you’d be equally overwhelmed by the scale of things. (Not really.)

Before looking at the other Gundams, models, goodies and whatnot, let’s take a look at the press conference itself and what happened. 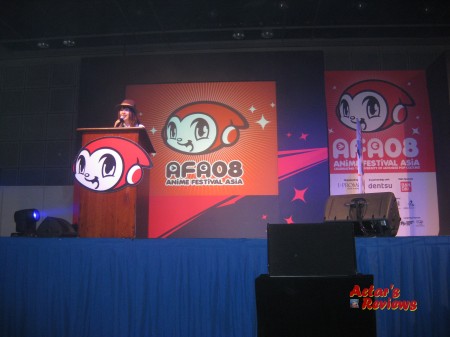 The main stage is where the press conference was held. This will be the same location in which May’n and Aniki – Ichirou Mizuki will be holding their respective concerts. 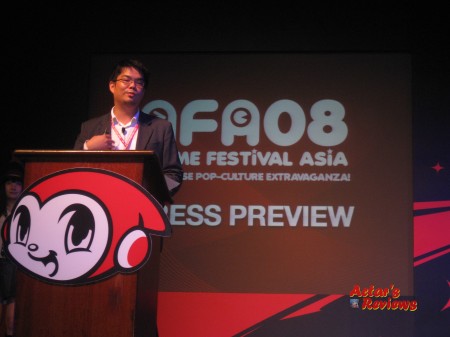 Yay! I'm part of the press.

First, Shawn (or Sean), explained in details the upcoming events and various aspects of AFA08.

In the first half of his speech, he mentioned the various Zones of AFA08:

… and a couple of other stuff including: 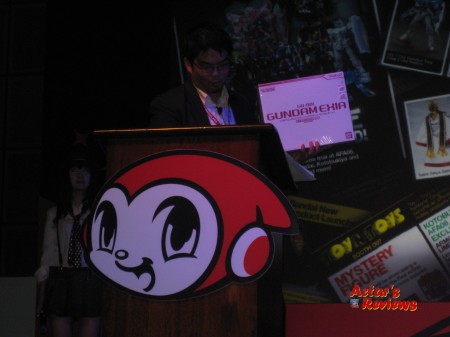 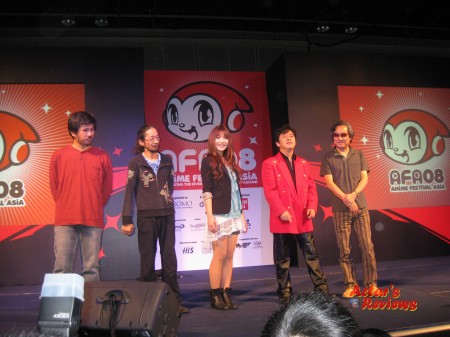 Everyone's present and accounted for!

After his speech, each of the special guests was invited on stage to answer one question each. Here’s a short video of their entry (among other things):

Once that was over, being Actar, managed to have a quick meet up with each of the special guests and got a picture + autograph! Here’s where speaking Japanese can really come in handy. :) All their autographs can be seen in detail at the end of the post.

May’n’s most well known as the singing voice of Sheryl Nome in the Anime series Macross Frontier. Having finished Macross Frontier recently, I could appreciate her songs and was exceedingly excited to meet her. She’s Japan’s latest pop diva sensation. It’s indeed hard to believe that she’s the same age as me, as she’s so mature. Yay. May’n kawaii.

He’s the big brother of many Anime fans. One of the most famous and respected Japanese singers of all time, he has sung the theme songs for classics like Mazinger Z, Captain Harlock and Kamen Rider. What an enthusiastic character he was. Warm and friendly, he did a ‘Z’ sign with his hand when taking pictures. Awesome fellow.

Someone I’m not exactly familiar with, he’s the director and founder of Japanese Animation Studo, Studio 4(degrees)C. At AFA08, he’ll be speaking about his latest work, ‘Genius Party Beyond’. He drew a very kawaii picture with some Japanese text. Translators anyone?

The Master behind Gundam, he is one of the or THE Mechanical Designer for Gundam. His designs on the original Mobile Suit Gundam caused a boom in the Japan model kit and popularity of Gundam. He continues to work for Sunrise on Gundam Seed Destiny and Gundam 00. What an awesome guy! He is indeed integral to the evolution of all Japanese Mecha. When he autographed my book, he even drew a profile of a Gundam head! Splendid!

Here are some of the stuff that were being prepared for the grand event tomorrow. I can’t wait!

Two girls were there today cosplaying as Sheryl and Alto from Macross Frontier. Cosplayers from famous Anime like Code Geass will be there tomorrow! 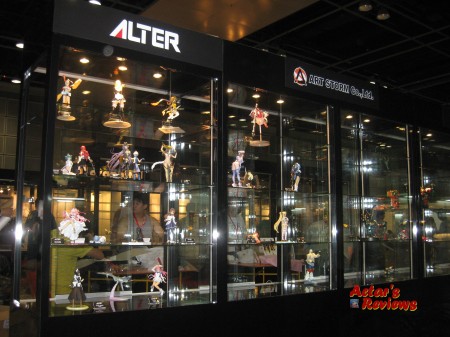 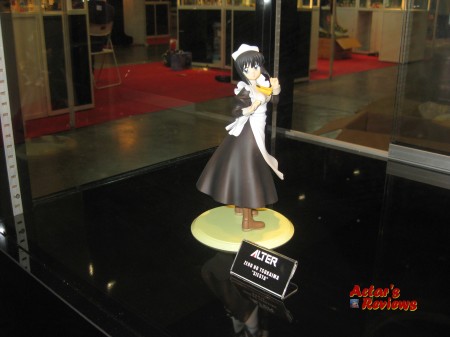 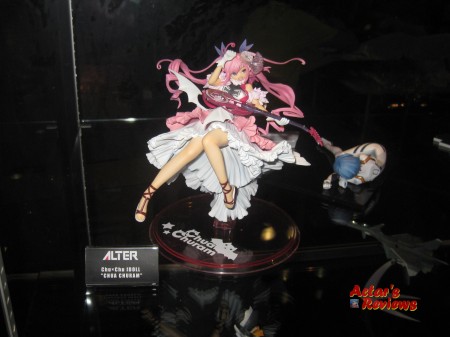 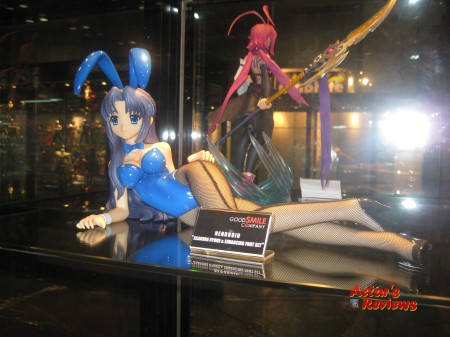 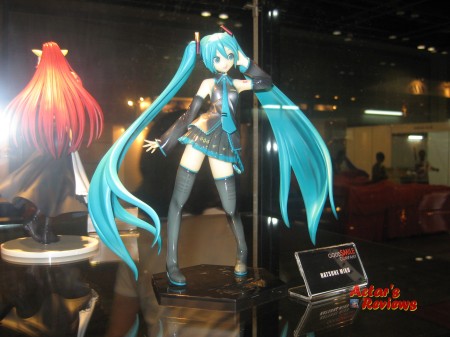 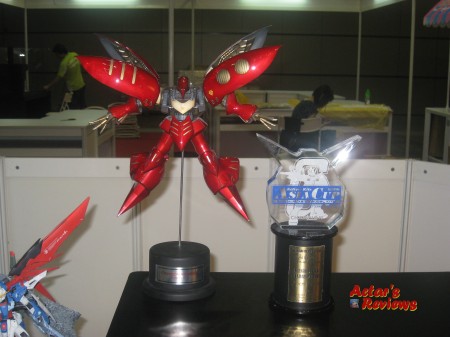 Here’s the main figure display for Alter, Kotobukiya, GSC and everything else. Some figures are shown above. Many of the shelves were still empty. Yet, there were still too many things to show you. I wonder how I’m going to upload everything… Can’t wait to see the completed display tomorrow! 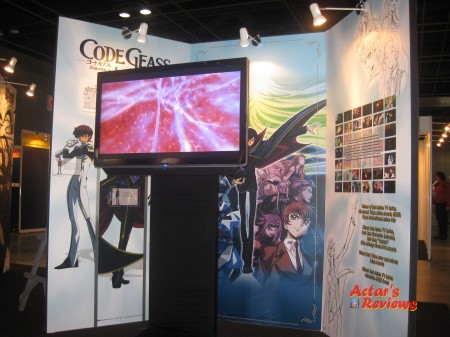 Boards and TVs featuring previews of various Anime. Skip Beat and Geass were my top faves. Some of the TVs were not up yet. ^^;

One can spend hours here...

Stores and Tons of Stuff/Goodies/Loot/Figures to Buy!!! 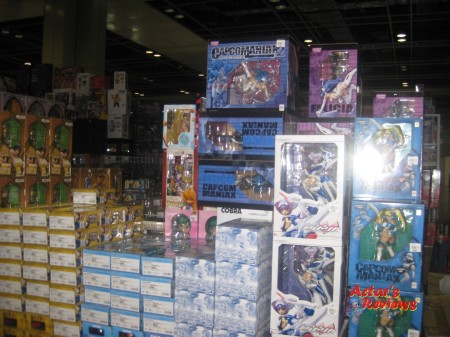 These are just samples of the many pictures that I have. The artist alley has some fine art of Nanoha. Reserved my set already.

At the end of the Press Conference, I headed home, after picking up Figma Miyuki, to blog everything immediately. Needless to say, I’ll be going to the convention both days. This press pass allows one to attend both concerts as VIP members and is your access pass at the same time. Great little pass. :)

Here are the 4 autographs from the special guests! Translations anyone?

Even her signature is Kawaii. <3 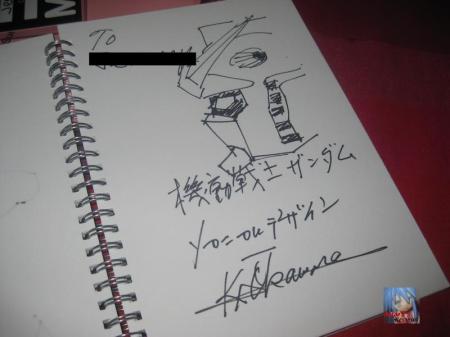 Again, Morimoto-san and Okawara-san were nice enough to sketch something special for me. :)

If you are going to AFA08, I’d be glad to meet you there. Come over and say ‘hi’! I most likely will be wearing an orange shirt. I’ll also don my Press Pass and the universal Haruhi Armband.

This entry was posted on Friday, November 21st, 2008 at 2:32 pm and is filed under Actar's Life, Anime, Events, Figures, Merch and Stuff, Other Stuff. You can follow any responses to this entry through the RSS 2.0 feed. You can leave a response, or trackback from your own site.