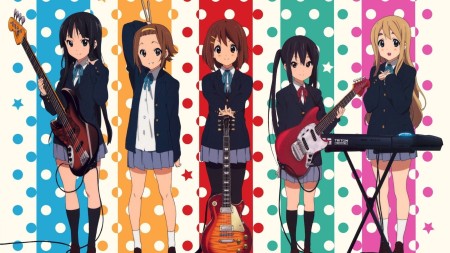 You never know how well put together something is until you take it apart. In this post, I’m going to analyze a scene from the final episode of K-ON!, showing how the framing and editing show Yui has grown as a character over the course of the series, gaining trustworthy friends that rely on her and finding a place where she can belong.

To give some context, Yui has just entered high school and had no new friends and no direction in life at the beginning of the series, signified by not knowing what afterschool club she wanted to join. By sheer happenstance, she ended up in the light music club along with the other band members, Mio, Ritsu, Mugi and Azusa. In the final episode where they were supposed to put on a concert for the school, Yui forgets her guitar and has to run back home to get it while the rest of the band members play another song to stall for time.

First of all, we have a continuous tracking long shot of Yui running back to school with a slow zoom to show her desperation and determination, the sliding background and foreground layers providing an animetic effect that enhances this feeling of speed through sideways relative motion. This sequence is, in fact, a shot-for-shot remake of her commute to school in the first episode. However, in the first episode, she was distracted by many things including stopping to pet a random cat, represented by quick cuts to stills that interrupted the tracking shot, grinding it to a halt. 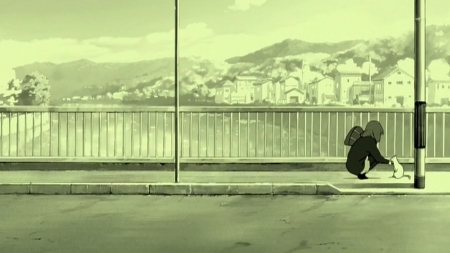 These cuts are still present in this scene. However, the stills are now washed out and in a single color, showing how all this occurred in the past. That, in conjunction with the deliberate parallels drawn between the first and last episode, emphasizes the change in her character, highlighting how she has finally found direction …literally. 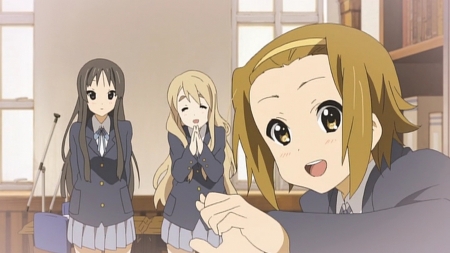 This feeling of growth is further enhanced by the jump cuts to flashbacks in the form of point of view shots from Yui’s perspective, showing all the accumulated experiences she had over the course of the series with the people who have made a positive difference in her life. The first-person perspective also allows the audience to relive key moments from the show, not as an omniscient third-person observer, but as one of the characters, making the sequence far more heartfelt and personal. 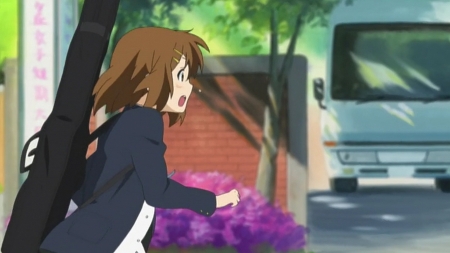 This tracking shot is then interrupted by cross-cutting back and forth between Yui and the rest of the band members performing at the concert. The first shot is also a match cut where Yui runs forward and Mio leans forwards to sing, emphasizing how in sync they are despite being separated. It is precisely because of the trust they have developed for each other over the course of the series that they are able to dedicate themselves fully to the task at hand. In addition, all this time, since the beginning of the scene, the song that is diegetic to the concert but not to Yui’s running has been playing constantly in the background. Far from being mere background music, it functions like a countdown, reminding the viewer of the urgency of the situation. Yui only has until the end of the song to make it back to school. The fact that Yui makes it back just in time once again shows how they are all in sync and how she never lets her friends down or betrays their trust. Going one step further, we can say that the music that plays uninterrupted during the cross-cutting, bridging the two disparate scenes, is a metaphor for how the characters are connected by music. It is after all the medium of music that allowed Yui to bond with the rest of her band members.

Once at the concert, Yui takes center stage. As the diegetic music begins to play, we have a medium close-up on Yui as she starts to sing, emphasizing the mouth movements of the character. This is rather pertinent as she is the lead singer in this performance, showing how she has taken on a prominent position in the band, again highlighting her growth as a character. Interestingly enough, this medium close-up shot and the ones that follow also function as a limited animation technique as it eliminates the need to animate the hands of the character playing the instruments.

We then have a medium shot of Azusa looking at Yui. The shallow focus shows how Azusa is framed in the background and to the side, emphasizing Yui’s prominent position. This shot is significant as it is shows how Azusa is watching over Yui from the sidelines and looking at her with confidence and pride. Azusa is the most skilled musician in the band, and this scene is symbolic of how she acknowledges Yui’s development and growth as a musician.

This is then followed up with an eyeline match to a medium close-up of Yui and Mio, confirming what Azusa is looking at. The shallow focus once again shows how Yui is in the foreground and to the front, symbolizing having surpassed her fellow members with Mio playing a supporting role. This hierarchy is emphasized by the diegetic song as Mio sings the backup lyrics and repeats what Yui says. This is even more significant as this song was performed once before in the series as their debut song, but with Mio as the lead singer. Just like with the monochrome cuts during Yui’s running scene, this scene serves to draw parallels to an earlier episode to highlight the change in Yui though juxtaposition. But at the same time, this is also more evidence of how they work perfectly together; reaffirming the trust they have for one another, with Mio having Yui’s back. 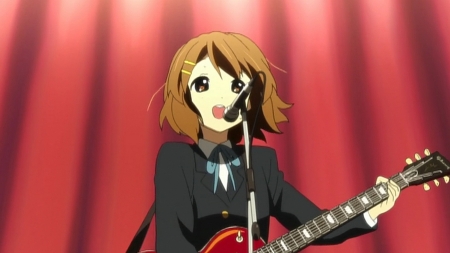 The camera then cuts to show a low-angle shot of Yui by herself. The low-angle shot emphasizes how independent Yui has become as she appears to stand tall and proud.

However, just as we get that impression, the camera cuts to one final long shot of the entire stage from the perspective of the audience. On one hand, we see that this shot reminds the audience that yes, while Yui is the center of attention, standing in the middle of the stage, she is surrounded by her trusty band members and is but one part of a cohesive whole. This is reinforced by the high key lighting surrounding the five band members, framing them in darkness. In order to put on a successful performance, you need all members to play together in harmony. This final shot cements in the audience’s mind the fact that Yui has found a place where she belongs.

This entry was posted on Friday, June 21st, 2019 at 7:21 pm and is filed under Anime, Articles. You can follow any responses to this entry through the RSS 2.0 feed. You can leave a response, or trackback from your own site.

One Response to Basic Film Analysis with K-ON!