How Lucky Star Changed my Life 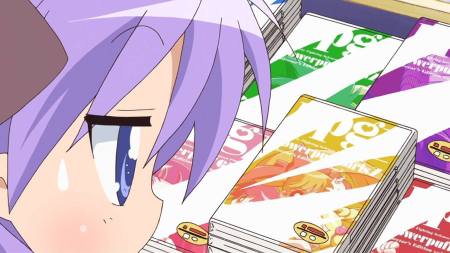 Here is the story of why I love Lucky Star and how it changed my life.

While I definitely knew that anime existed and had watched shows like Digimon, Cardcaptor Sakura, Sailor Moon, Pokemon, Robotech, Ghibli and Yu-Gi-Oh! before, I never really thought of them as anime. Most of them were dubbed in Chinese/English on TV and for Yu-Gi-Oh!, I actually kept up with it by buying the 4Kids DVDs from Amazon whenever they were made available. Again, I was never into the fandom nor was I cognizant of Japanese otaku culture. The first time I heard of the word “otaku” was from a short-lived spin-off Transformers podcast and I even had trouble pronouncing it.

Truth be told, Lucky Star wasn’t the first anime I watched that I recognized as anime. That honor goes to Powerpuff Girls Z. In fact, that was how I came across Lucky Star. For a time during my high school years, I was hugely passionate about US cartoons and comics, Samurai Jack, Dexter’s Lab, Transformers, Marvel/DC, etc… However, one of my favorites was Powerpuff Girls. From there, I actually heard about a Japanese adaptation of the series and I began to watch it and fall in love with it. (Honestly, if I were to attribute nostalgia goggles to any one series, it would be this one…) Regardless, from participating on online forums, I heard someone mention that PPGZ was referenced in another anime. This anime would be Lucky Star (as Blossom was also voiced by Emiri Kato, who voiced Kagami). After watching the episode that the reference was in (unsubbed, I might add), my interest was piqued.

Progressing to marathon the series, I was captivated by the charm, wit and humor. Finally, there was a series that actually got me and seemed to deal with issues that no other show at that time did. Not issues about saving the world or battling your inner demons or struggling with one’s morality or trying to rationalize the human condition. Real issues. Issues that mattered to me. Finding friends, going to school, cramming for tests, having fun, living life. These characters were more real than any other characters I’ve ever seen anywhere else. As I mentioned in my earlier post, you’re not going to know the favorite foods of the characters in many other anime unless it serves a purpose to the story. The brilliant thing about Lucky Star is… there is no story! Just like life itself! A slice of… life? Well, how about that!

But more importantly, there were 2 things that Lucky Star did for me that I will always be thankful for. Firstly, it opened my eyes to the fact that there was a whole new world out there for me to explore. I didn’t get any of the references, but it made me want to learn. What’s this SOS Dan thing Konata keeps talking about? It made me feel like I was losing out by not watching these shows and boy was I. From Haruhi to Code Geass, my anime repertoire grew from there. I found that anime was my “true calling” (as cliched as that might be) and I will always thank this series for leading me down the rabbit hole (in a good way).

In addition to anime, it also introduced me to otaku culture. Lucky Star can be seen as a celebration of otaku culture (while still acknowledging and poking fun at its dark side from time to time). While I have gained a much deeper understanding and fuller picture of otaku culture over the next decade with shows like NHK, Genshiken and Otaku no Video (and books and academic journals), Lucky Star is one of the few shows that truly have fun with it and makes it its own. Comiket? That was the first time I heard of it and I was fascinated by the concept. Imagine my surprise when it was exactly the same as how it was portrayed in the anime when I finally managed to attend Comiket years later. I was living the anime.

Lucky Star also introduced me to Japanese culture in general. School trips, New Year’s festivities, festivals, customs, school system, etc… Again, I’m not going to claim that it was a crash course in Japanese politics or anything, but it was just as fascinating all the same and spurred me on to learn more by myself.

From reflecting my life, it became a slice of my life. (See what I did there?) I made anime my life’s passion. I picked up Japanese (dabbled in freelance translation) and through my intensive course of study in college, made a ton of friends with similar interests who I can say will be with me for life. I literally wouldn’t be where I am today without this show. Does it hold sentimental value for me? Sure. I’ll be the first one to admit it. The beautiful thing is, all that mushy stuff aside, unlike Powerpuff Girls Z, I can confidently say that while the references in Lucky Star are dated, the characters, anecdotes and vignettes are just as sincere, timeless and relevant as they were back then.

In our quest to be elitist, intellectual and analytical, perhaps somewhere along the way, the characters cease being human. Even if Lucky Star is not your cup of tea (watch K-On! for that), if any genre is going to teach us about being human, I think this is the one to do it.

This entry was posted on Saturday, August 3rd, 2019 at 7:26 pm and is filed under Actar's Life, Articles. You can follow any responses to this entry through the RSS 2.0 feed. You can leave a response, or trackback from your own site.

4 Responses to How Lucky Star Changed my Life