Choosing Which New Series To Watch

How I select new shows to watch for each new season of Anime?

END_OF_DOCUMENT_TOKEN_TO_BE_REPLACED

The ultimate fusion of KaiserGreymon and MagnaGarurumon, the Legendary Warrior Susanoomon!

END_OF_DOCUMENT_TOKEN_TO_BE_REPLACED

Tessa Sends a Message to Victims of the Earthquake

Voice actress Nogami Yukina (Teletha Testarossa from Full Metal Panic!) has posted a video, sending a heartfelt message to the victims of the recent earthquake in character. I thought it was a exceedingly thoughtful gesture. The script was written by the writer of the FMP! Novels, Gato Shoji, and the picture drawn by the illustrator, Shikidouji.

I have translated what she has said to spread the message to non-Japanese speaking fans as well. (If I missed out anything or got anything wrong, don’t hesitate to point it out.)

Everyone, can you hear me?

This is the Captain of the Tuatha De Danaan, Teletha Testarossa.

To the victims of the recent disaster and to their families, as the representative of the ship, I offer my condolences.

The situation is tough, but I firmly believe that everyone can somehow overcome this crisis and recover the peaceful times once again.

That is because everyone… uwah!!!

I’m sorry! I dropped my mike and tripped when I tried to pick it up…

At any rate, don’t give in to anxiety and don’t ever give up!

Everyone is rooting for you, of course, me included.

I’m praying for your good fortune.

I would love to subtitle the video and upload it to Youtube to spread the message, but I’m not sure if that would be appropriate.

The second of two Japan only figures from the Spirit Evolving Digimon Frontier line, MagnaGarurumon!

END_OF_DOCUMENT_TOKEN_TO_BE_REPLACED

The True Meaning of ‘Moe’ 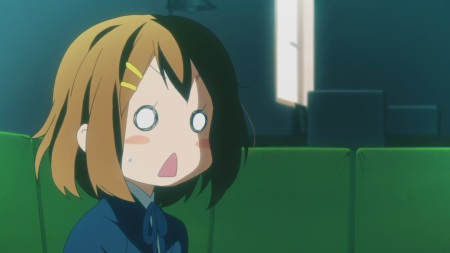 ‘Moe’. Some hate it, some love it. But what exactly is it? Why is Yui a ‘moeblob’? What does that even mean? Most of the time, people fling the word around without really knowing what it means.

– A cutesy artstyle?
– A type of character behavior?
– The desire to protect?
– The sexual depiction of little girls?
– Slice-of-life shows with no ‘plot’?

END_OF_DOCUMENT_TOKEN_TO_BE_REPLACED

Here are some short comics of Madoka that I have translated to share with you guys. Spoiler Warning!!! (Mainly for episodes 3 and 9)

END_OF_DOCUMENT_TOKEN_TO_BE_REPLACED

(Anime) Super Powers and What You Would Do With Them

After watching the latest episode of Madoka, I was reminded of a set of questions that I was confronted with by RadiantDreamer awhile back.

Look deep inside you. If nothing can stop you from doing what you want to do, would you do it? What would you do? Would you be more inclined to cause crimes if you were unstoppable? Are social moral chains holding you back from doing whatever you want? Are you not going out to commit crimes because you know you’ll get caught? Or because you actually are a good person at heart?

The question is actually a follow up one to “Anime super powers you wished you had” So, here’s my answer which responds to both questions.

END_OF_DOCUMENT_TOKEN_TO_BE_REPLACED

The True Target Audience of Anime 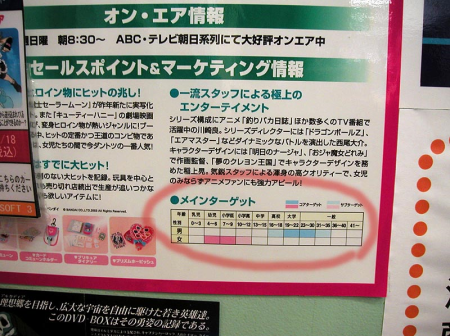 I chanced upon this picture and could not not share it. It’s the official Sales and Marketing report for the Anime ‘Futari wa Precure’. Check out the circled table which is labled ‘Main Target’ (audience).

Next time someone gets on your back for watching/liking Anime meant for little girls, you can now tell them it’s officially for grown men as well. (^.^;)

*For the record, I love Precure, with my favorite being Heartcatch. The original was good, but had some elements that really annoyed me, especially the ‘buy our merchandise’ vibe and stupid villains which thankfully has slowly been diminishing with each new series. Have to admit though, that theme is catchy as hell and I <3 Nagisa. That is all.

Still not satisfied with Figma Nanoha? Well, why not check out GSC’s latest addition to their Nanoha figure line, ActSta Nanoha.