Why Yui is my Favorite K-On! Character

Ah, Yui… she is undeniably popular and is always amongst the top in many K-On! character popularity rankings. However, she is usually bested by other fan favorites like Mio and Azusa. Putting aside the fact that Mio and Azusa are super-popular and have legions of fans, I suspect that Yui often falls short of the top spot because she has a reputation of being klutzy, airheaded and annoying to a fault. While this is arguably true to a certain extent, quoting the tagline of a famous toy property, I believe that there’s more to her than meets the eye.

In this post, I shall share with you why I personally find Yui to be the best girl in the K-On! anime series. As with all my opinion posts, you are perfectly free to agree or disagree with me. I won’t hold it against you. For more than a couple of months.

Alrighty. Reason number one: Yui is cute and moe as all hell. This is an irrefutable fact. Yes, her clumsiness and ditzyness might be extreme and a turn off at times, but I don’t think it detracts from her overall charm.

Of course, those are all just superficial traits and mannerisms. Looking past that, however, one will be able to see the numerous redeeming qualities that Yui possesses. The following, more serious reasons, made me fall for her character.

First off, Yui is someone who earnestly cares a lot for the people around her. Despite her airheadness, many times throughout the series, she is able to get a good grasp of the situation and takes her friends’ problems seriously. In addition, at the end of various activities, she makes the most meaningful observations.

Basically, there is a method to her simplicity. It is precisely because she doesn’t complicate issues that she is able to get to the crux of things.

Case in point, when Ritsu had a emotional breakdown with her getting tired of drumming, Yui kept thinking of different ways to help her out and came to a superbly succinct and meaningful conclusion. 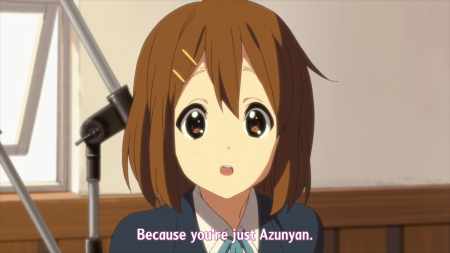 She did the same for Azusa when she was somewhat confused about her identity in the band.

In fact, this leads me directly into another point that I have regarding her concern and care for others – it is that is she always writes her songs and plays her music for the sake of others.

For instance, Yui goes out of her way to perform at the local talent show to reciprocate her Granny’s kindness.

The same goes for Ui. However, this time, she writes a brilliantly touching song to express her gratitude for Ui.

Throughout most of the K-On! Movie, Yui was the one who was consistently thinking about Azusa’s song – even when she was supposed to be enjoying herself and seeing the sights of London.

..and she sings just a little bit extra of Gohan wa Okazu for the baby in London. 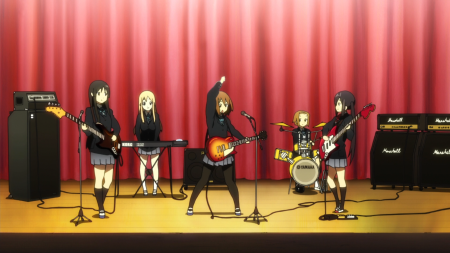 Moving on, I would contend that Yui is the one character who grows and changes the most across the span of the series. What do I mean? She gets friends, joins a club, leans a skill, discovers her talent and what she wants to do in life, becomes a phenomenal guitarist and becomes an ace at performing and MCing. That’s not an easy thing to do. Believe me. Sometimes, her airheadedness can come in handy. 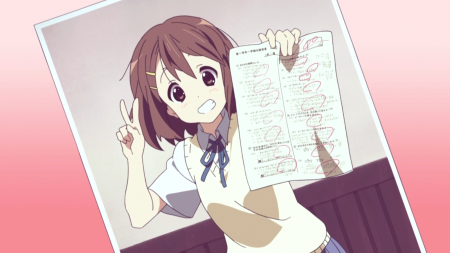 Next, while she is definitely the personification of laziness, but she is undeniably smart and can do anything if she puts her mind to it. Honestly, she reminds me of myself (yes, I realize I just called myself smart here). Not to mention, you can’t say that she is not hardworking because she practices a lot!

Last but not least, it’s her personality. If you ask me, Yui has that special spark that allows her to brighten up the room just by being in it. Again, that’s not an easy thing to accomplish and something that I personally really value. Seriously, how can you listen to Ichiban Ippai and not have your spirits lifted by the end? There is just an earnestness and sincerity to her that we just don’t see that often.

So, there you have it. Just some of the often overlooked aspects of Yui that make her unequivocally very appealing to me as a character. Of course, she does have her own flaws and faults, but who doesn’t? Now that the entire K-On! saga is behind us, it would be great to hear from you, fellow K-On! fans, about who your favorite character is and why.

This entry was posted on Monday, February 18th, 2013 at 10:15 pm and is filed under Anime, Articles. You can follow any responses to this entry through the RSS 2.0 feed. You can leave a response, or trackback from your own site.

10 Responses to Why Yui is my Favorite K-On! Character