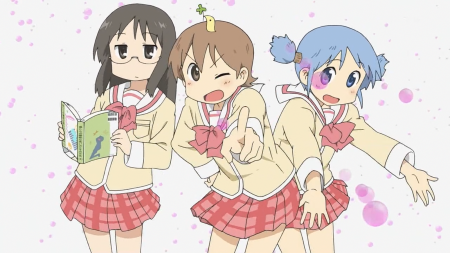 The funny thing about the phrase ‘time flies’ is that you really never seem to notice it until you look back on the events and days that have passed you by. And just like that, in the blink of an eye, another brilliant series, Nichijou, has come to a close. Unequivocally one of the best shows this past few seasons, along with Steins;Gate and Kaiji.

If you remember my first impression post on this show, I gave it a less than favorable review. I questioned the logic behind it and the absurdness and randomness of it all. But it was only after watching a few more episodes that I had an epiphany. I was going about it all wrong. For you see, I was comparing Nichijou to other Slice-of-Life shows like Lucky Star, Ichigo Mashimaro, Genshiken, Miyabi Straight, K-On, etc… where they were relatively bound to the rules of our reality and dealt with normal, everyday issues. The humor in those shows relied on how the characters interacted with the everyday issues in a comical, condescending and satirical manner that can be considered a social commentary at times and a pretty accurate reflection of society at times that you could really relate to.

Nichijou is not this.

Nichijou is a show that is truly self-contained. Despite its namesake, it’s logic is not founded on the rules of our reality, it does not rely on current issues nor it is not a reflection of society. I mean, we have child professors, fully sentient androids and talking cats for crying out loud. Its name comes from the fact that the show is about the everyday lives of the characters. Albeit crazy ones. 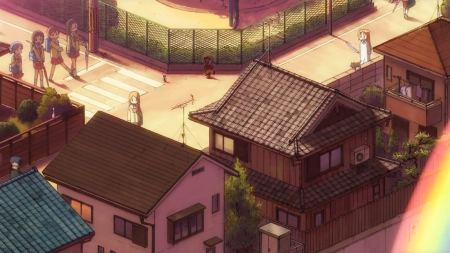 Once I got over my misplaced expectations, I then began to enjoy Nichijou for what it truly had to offer, its awesome characters, bizarre situations and over-the-top non-stop gags. That’s it. That is really all that Nichijou is good for in a nutshell but boy it does it do a phenomenal job at it. The characters all have their unique perks and quirks and are fully fleshed out. (From Yuuko’s gags to Mio’s Yaoi manga to Mai’s Buddha(?) statues.) Not to mention, a ton of side characters were given numerous chances in the lime light with is something that isn’t seen too often. The recurring side characters, I think, make the world of Nichijou just that much more believable.

Despite being in a completely different dimension, you are able to relate with them, empathize with them and love them. It also helps that the character interactions were some of the best that I have seen in awhile. You can thank the direction, writing and comedic timing which is top-notch. 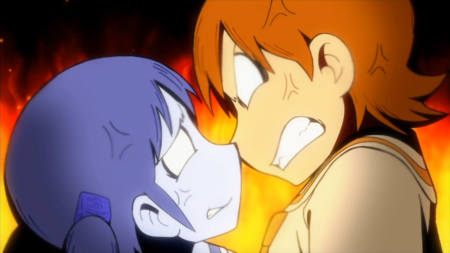 One of my favorite scenes from the entire series is the argument between Yuuko and Mio over the wrongly purchased Yaki Saba. The argument was so realistic and so natural sounding that when you stop to think about it, makes one wonder how on Earth they were able to script it out. As many writers will tell you, one of the hardest things to write is dialogue that sounds natural and unrehearsed. 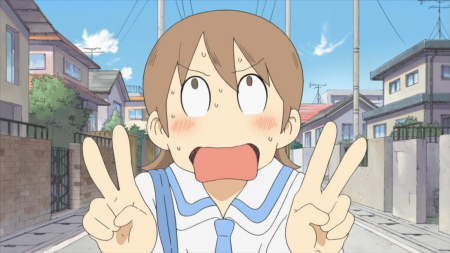 Of course, it would all have come to naught it it weren’t for the excellent voice acting. It is without a doubt that the star of the show would be Yuuko’s voice actress, Honda Mariko. She barely has any credits to her name, but I think her performance in Nichijou speaks for itself. I don’t think Yuuko would have been half the awesome character that she was if Honda Mariko was not able to perfectly articulate the myriad of emotions with her voice alone. Needless to say, the animation style and quality of Kyoto Animation really does lend to the overall success of many of the gags, what with all the expressions, effects and styles. 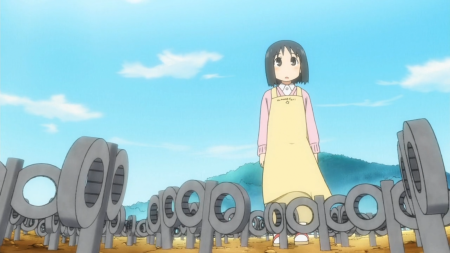 Another character that is worth mentioning is of course, our resident Pinocchio herself, Shinonome Nano. Arguably the only character that received the most amount of characterization and a number of story-arcs all to herself. While her situation is undoubtedly not the first, I really liked the significance of her key and what it symbolized. 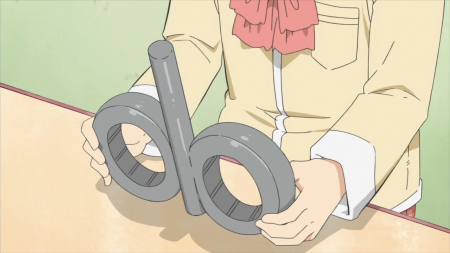 Slight spoiler for the final episode, but in it, we see Nano realizing that her key and her uniqueness was not a hindrance to her dream of making friends. In fact, I would like to propose that her key allowed her to make TRUE friends. Ones that won’t judge her for who she is and accept her differences. Unlike Pinocchio, Nano does not get turned into a real girl through the magic of a Blue Fairy. She is who she is. And at the end, she accepts and embraces her uniqueness.

I am 100% certain that everybody in the entire world can relate to Nano and how we are unsatisfied with some part of ourselves. Nano’s key is that part. That uniqueness is not something to be ashamed about, nor is it something to be feared, but something to be embraced. It is precisely these flaws, these unique traits, that make us who we are. Thus, aside from Yuuko, Nano emerges up on top as one of my absolute favorite characters from the series. 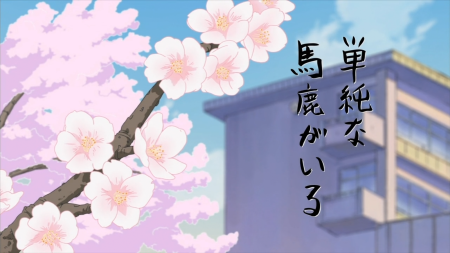 Lastly, if there is anything that I could critic about the show, I would definitely have to say that just like Lucky Star, the first few episodes were quite slow. But again, just like Lucky Star, it was able to build up speed and was able to maintain a consistent, no-holds-barred roller-coaster ride of fun through to the end. And what an end it was, truly befitting of the show’s name, Nichijou… which if you noticed, ended off with the the first sketch and Sakura Blossoms in the very first episode, signifying the cyclic nature of the seasons. Definitely not something new, as we see this in Ichigo Mashimaro as well, but extremely effective in conveying the continuing everyday life.

Despite the initial misgivings I had for the show, I can proudly say that I will, without hesitation, drop 36,000 yen on a Blu-Ray Box Set if Kyoto Animation does ever decide to release one, just like they did with Lucky Star and Haruhi.

I am truly going to miss my weekly window into this world. Mio, Yuuko, Mai, Hakase, Nano, Sakamoto, I bid thee farewell. (Until the inevitable OVA that is.)

This entry was posted on Thursday, September 29th, 2011 at 12:49 am and is filed under Anime, Articles. You can follow any responses to this entry through the RSS 2.0 feed. You can leave a response, or trackback from your own site.

3 Responses to The Never-ending Nichijou