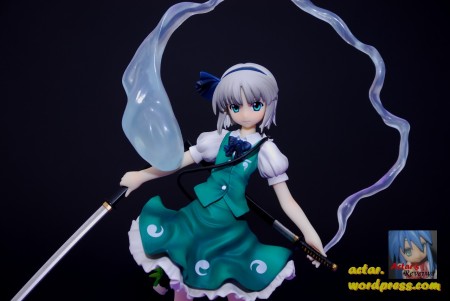 As you can see, Youmu is a dual sword wielding girl that has a ghost half. Let’s check out her character description taken from the ever “reliable” Wikipedia:

Youmu is the gardener of the netherworld pagoda, Hakugyokurō. She comes from a very rare breed, the half-ghosts; in this strange combination, the human half and ghost half exist in physically separate bodies, but are always close by one another. Youmu is very young for a half-ghost, under 60 years; her exact age is unknown. While straightforward, focused and loyal to her mistress, Yuyuko, Youmu is still rather immature, and tends to be a target for teasing by the other girls of Gensokyo (particularly her mistress Yuyuko). Paradoxically, she is afraid of ghosts (the imaginary sort). Her talents are swordsmanship and speed. In the games, she is characterized by creating powerful danmaku with her sword slashes, and slowing time (this is not due to magic as one might expect, but because of time slowing around her body as she goes past at unimaginable speeds). 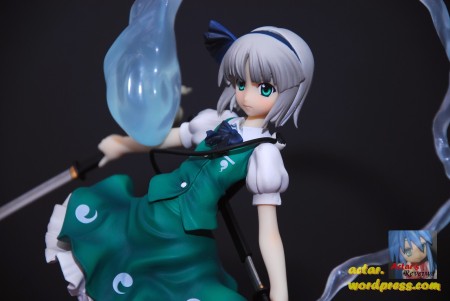 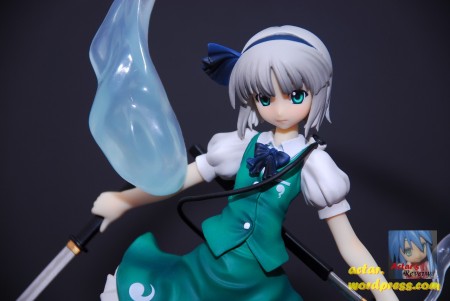 As to why I find Youmu so appealing… I don’t really know. (^.^;) Unlike Aya, whom I like because of her personality, photographing hobby and the game “Shoot the Bullet”, Youmu’s unique design attracted me right of the bat. Throw in dual swords, shoulder-length hair and an immature personality and you’ve got a done deal.

While her ghost half was splendidly represented in figure form, what which the correct application of translucent white plastic, I believe it would have been even better if they had her ghost half encircle or twirl around her body. 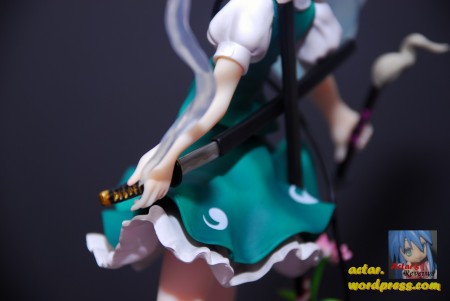 Youmu’s shorter sword, not familiar with the technical term, is not removable while her main sword is. 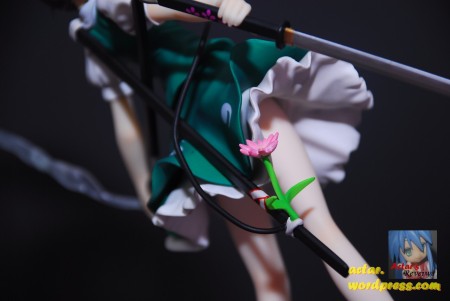 Note the exquisite, intricate touches of detail like the flower attached to her scabbard. This makes for such a vibrant and stark contrast to the rest of the figure.

Griffon’s signature metal nameplate featuring the character’s name in both Japanese and English adorns the base. This does add a sense of prestige and personalization to the figure that I’ve always liked.

As usual, what better way to end things off than a gratuitous panty shot! (^o^) More touches of detail to note include her painted fingernails and flower printing on the handle of her sword.

Overall, a stellar and well executed figure and another phenomenal addition to Griffon’s Touhou figure line. One of my only gripes with the figure would be her pose. As with most figures of sword wielding girls, a more dynamic pose would have really made the figure even better.

This entry was posted on Friday, July 16th, 2010 at 10:15 pm and is filed under Figure Photo Reviews, Figures, Merch and Stuff. You can follow any responses to this entry through the RSS 2.0 feed. You can leave a response, or trackback from your own site.