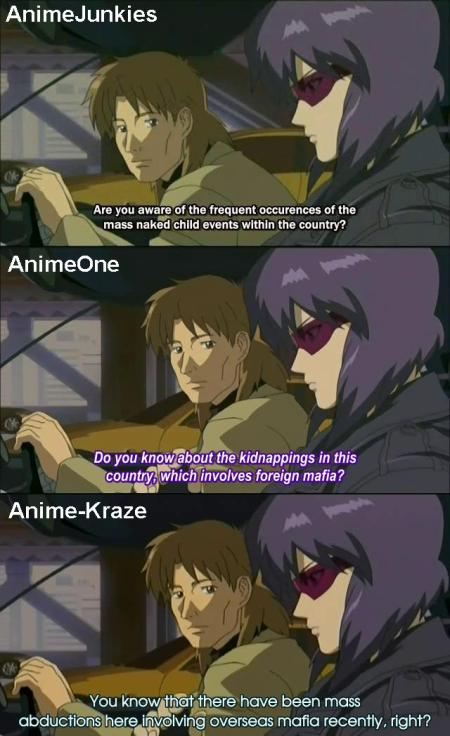 Mm… Haven’t written an article in a long while… Time to shake things up with my opinions and observations on Anime subtitles, both official and fansub.

First off, let me just clearly state that I indeed appreciate everything that fansubbers have done for the community, and you can read about that in one of my previous articles. Translating anything is a very arduous task and I hold great respect for the people who go out of their way, be it fansub or professional translators, to subtitle our favorite Anime in a language that we can understand.

That being said, as fans, we do tend to nitpick (in cruder terms, bitch and complain). Like many fans would agree, ideally, subtitles should be able to convey whatever is being said in one language, to another, while being as close to the original as possible.

The whole Liberal Versus Literal subtitling debate is an exceedingly complicated, convoluted issue that is filled with personal preference and bias. With subtitling and translating, it seems that you can not satisfy everyone.

Some common questions that are brought up include:

– Do you use honorifics like -chan, -san, -kun?
– Do you Americanize ‘Onii-san’, ‘Senpai’?
– Do you keep the last name/first name naming system of the Japanese?
– Do you whitewash jokes that have to do with a play on Japanese words?

While I’m all for literal subtitling, and keeping the Japanese essence of Anime, it seems that there are people who are vehemently opposed to this.

Such characteristic Japanese words like ‘skinship’ (referring to gg’s release of Ookami Kakushi where they replaced it with ‘kinship’) along with aspects and nuances of Japanese Language and culture are unique to Japan and are prevalent in Japan. Anime, being a distinctive, uniquely Japanese product, will undoubtedly contain jokes, phrases and such that are unique to Japanese culture.

Personally, I don’t agree with the mentality of ‘having literal subs wouldn’t be fair to someone who just started watching Anime’. If one wants to watch Anime, it will only be fair if that person learns or is exposed to Japanese culture. Is it right to say: ‘I want to watch Anime, but don’t care for anything Japanese.’? If so, why turn to Anime? I’m sure that other cartoons can provide the same entertainment value, riveting plots and interesting characters.

I and many a fan have been at that point where nearly everything about Japanese Culture in Anime seemed alien to us. If a person is truly interested in Anime, he or she should invest time to learn. When first watching Kodomo no Jikan, ‘skinship’ was a new word to me.

Many other things like the meaning of ‘calling each other by the first name’, ‘call me -chan instead of -san’, both important indicators of how close characters are, seemed strange and bizarre to me at first, but as I continued to watch more and more Anime, reading exceedingly useful Translator Notes and looking up the appropriate resources, I began to understand more and can now appreciate Anime better.

Through Anime, I have learnt a lot about Japanese culture, from the way people communicate with each other to their festivals, traditions and believe it or not, learnt a great deal of the Japanese language as well.

Is it right to simply white wash all of this?

People argue: What’s wrong with replacing honoorifics if suitable English substitutions can be found? The thing is, most of the time, such substitutions are awkward and don’t bring convey the correct meaning across. 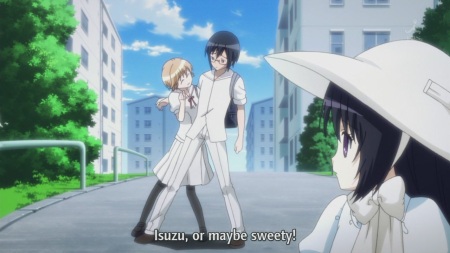 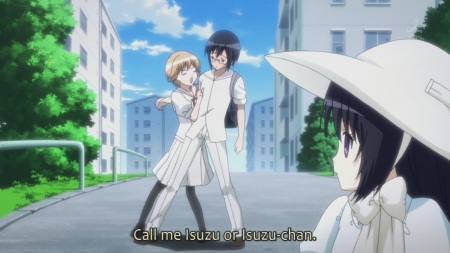 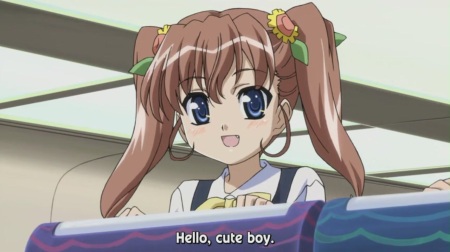 Expanding on this, what would Onii-san translate to? Cute Boy??? 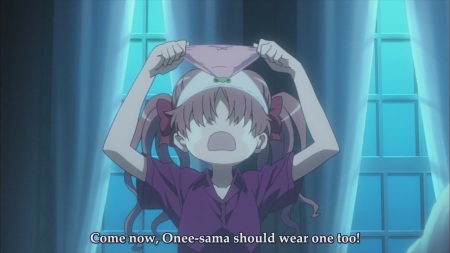 How about the ever-popular Onee-sama? How can you find a suitable replacement? Mistress? Sister? Would ‘Mikoto’ suffice? I think not.

What do you think is appropriate? It’s all fine and dandy till a character spouts an honorificentric line.

Continuing on, some say that the audio is unchanged, so more hard-core fans can still her and interpret the honorifics and the first name/last name thing. Oookaaay… Do you know how disconcerting it is to read and hear something different? Splitting one’s focus is not an easy thing to do nor does it make for a very pleasant viewing experience.

The thing is, those who are looking for a set guideline or rule won’t find it. Most of the time, its up to gut feeling… What sounds correct or more appropriate?

‘Politeness is a critical part of Japanese language and culture, and honorifics are a key element in that. In general they are expressions of respect or endearment, but as with many terms in many languages, delivery — tone and emphasis — can change a title of utmost honor to an insult. Using the wrong honorific, or the right honorific in the wrong way, can result in anything from simple disdain to (in feudal times, at least) clan warfare.’

Thus showing the importance of honorifics in Japanese society and in conversations and why they literally are an important aspect of Anime.

On the subject of making things easier to understand for ‘new comers’, where do we draw the line? Will we regress back to the days of Digimon and Sailormoon where anything with even a tiny hint of ‘Japanese’ is changed? *shudder* 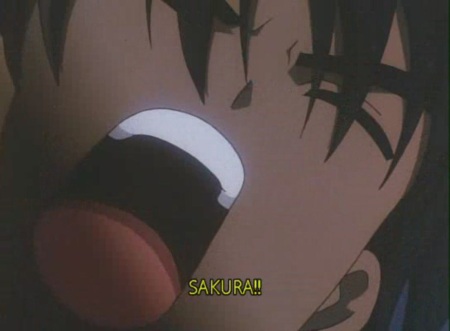 For instance, the closeness of characters that is represented by calling each other by their first name. The pivotal scene in Card Captor Sakura (the one where Li shouted ‘Sakura!’) would not have had the desired effect if translators had taken the more localized route. 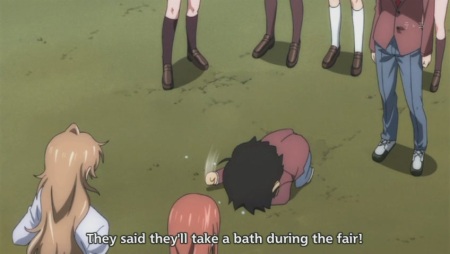 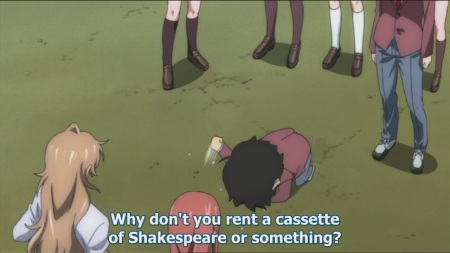 Whatever your stand on TL notes, you can’t deny the fact that they are exceedingly helpful and informative. One of fansub’s best assets in my opinion, if they make it non-obstructive enough.

Indeed, one can say that ‘nothing of importance to the show/plot is lost’. But if the joke/intent of the dialogue/original meaning is literally ‘lost in translation’, can that be considered good subtitles? I understand that it’s nearly impossible to find a balance or to draw a line when deciding how literal subtitles should be, but translators should try their best.

Fansubs are for fans and I do suppose that the majority of fansub watchers will have experienced their fair share of Japanese culture already and will be well versed with it. If not, we should allow them to take the opportunity to learn instead of cutting things out ‘for their sake’. 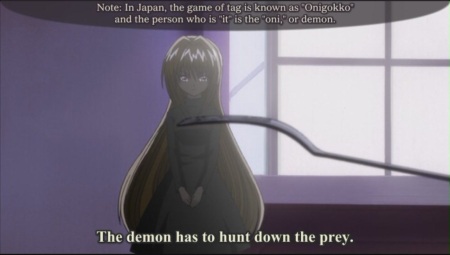 An example of how TL Notes help explain the nuances of Japanese culture and language.

Following up on that, Liberal subs tend to provide translations that retain only the general meaning of what is being said at the expense of accuracy. While a word-for-word translation is impossible, key words and phrases that are used by characters should be best translated.

I’ve found that many lines in numerous shows were translated very liberally in gg’s recent releases.

A quick example: the word ’embarrassing’ (hazukashi) was left out in Akihisa’s line and was translated to ‘make it sound all noble’. There are many, many more instances of this, but I don’t want to spend too much time picking everything out… (^.^;)

EDIT: The above comment applies to only the first episode or two. The rest is troll-filled garbage. Avoid at all costs.

And this is another aspect of liberal subs that I dislike. Through literal subs, I was able to pick up and learn many Japanese words and phrases that wouldn’t have been possible if I had watched subs like those of gg. I feel that a translator’s job is to put forth not only the meaning of what is being said but try as best to retain the original wordings and intention of the dialogue, on top of the meaning. Why arbitrarily change what is being said?

Fans who can understand even basic Japanese will feel unnerved and perturbed at best. This again creates that disconcerting feeling when one reads and hears different things. However, even though many of us can understand various Japanese phrases, we do still need subtitles as we aren’t yet completely competent or fluent in the language. (Don’t give me that ‘then you don’t need subtitles’ argument.)

Though, it is comforting to know that there are many sub groups out there who are picking up more and more of this seasons shows I was worried I’d be stuck with either HorribleSubs or gg, both guilty of liberal subbing. Frostii, Chihiro, Nekomimi, Mochi Doki and others are doing fantastic jobs in my opinion. If you prefer more literal subs like I do, go with them. (^.^) These groups might be slower, but I choose quality over speed.

The best option that can please both sides is of course offering two separate subtitle tracks (localized and not localized) for people to choose from.

Many recent R1 DVDs are doing this.

…and even Frostii is doing this with their K-On! Blu-Ray releases. Amazing job and I applaud them for their efforts. But I do realize that this is an exceedingly strenuous task and I don’t see many people willing to invest that much time and effort into doing this.

Last but not least, I want to touch on the point that there are many who are unaware of the liberal versus literal subs thing. With CrunchyRoll providing such ‘quality’ subs to the general audience, they won’t know what hit them.

They aren’t giving the fans a chance to decide which subs they want. It’s really sad that the Anime isn’t shown in it’s entirety, but I’ve talked too much about that already on how everyone should experience everything that Anime has to offer.

Talking bout CruncyRoll, I’m all for the idea of legally streamed Anime. If I can support the industry and yet watch Anime for free, why not? The thing is, their subs fall short as tediously illustrated above.

…not to mention: translate the openings and endings. I want to UNDERSTAND the songs.

In conclusion, call us weaboos and whatnot, it’s because fans are passionate about Anime and Japanese culture do we nitpick . Is wrong to be interested in another culture?

To clarify my stand once again:

– The best subs, should retain the meanings, wordings and intent of the original dialogue as best as possible, while still making sense in another language.
– Honorifics should be left in, cultural references should be left in, phrasings should be as close as possible, plays on Japanese words should be explained, etc…
– I’m not against the existence of Liberal subs as there are indeed fans who prefer Liberal subs.
– It is NOT alright for fans who do prefer Literal subs to settle for Liberal subs as their only option.
– I’m also against not making the viewer aware if the subtitles that they are viewing are localized or not.
– Newbies should be exposed to non-localized subs to show them what Anime has to offer.

Anyways, I have to say again that if it weren’t for fansubs, I wouldn’t have been able to immerse myself in the wondrous world of Modern Japanese Visual Culture and I’m thankful for that. (^.^)

Hopefully, I’ve been able to clearly express my views as this was one of the hardest articles I have written… Weaboo or not, I really want others to experience the full joys of Japanese culture and what Anime has to offer.

Comments? Questions? Critiques? What is your stance on this subbing issue? Do you agree or disagree with me? Or do you just pay it no mind? (^.^;) Please do not post derogatory comments. Be civil and polite.

This entry was posted on Monday, February 1st, 2010 at 12:21 am and is filed under Anime, Articles. You can follow any responses to this entry through the RSS 2.0 feed. You can leave a response, or trackback from your own site.

21 Responses to Liberal Versus Literal Subtitles