Actar in Tokyo – Day 3: My Tokyo Tower in Otome Road 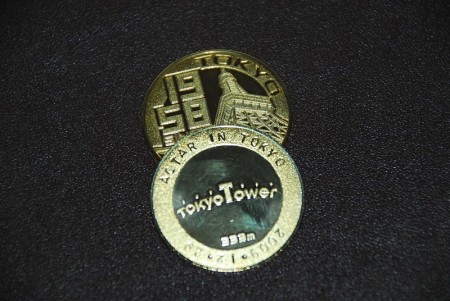 I fight a fierce and furious battle with the sleep monsters as I pen my experiences down in my humble little blog. Thus, since I seem to be losing this battle quickly, I’ll cut down my exposition and let my pictures do most of the talking. Hm…

First stop of the day was Shibuya. Over there, we headed over to the nearest shopping center as there wasn’t really anything of note to do in the city.

Except the fact that Krauser has gone the route of celebrity endorsement.

The market place contained a wide variety of foods, most of which were distinctively Japanese. 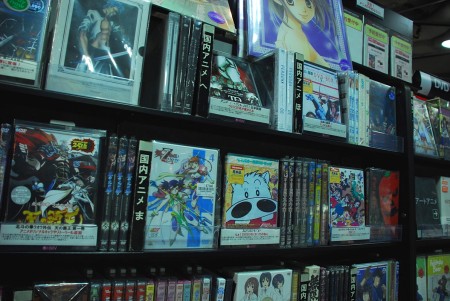 Another place of interest in the shopping mall is HMV.

Hilarity ensued when I saw this Endless Eight box set. 8 times the LOL for a bargain price!

While I suppose many countries have HMVs, including my own, I doubt that any of those international outlets will contain this many Anime related DVDs, BRs and CDs. But if you think this is much, you haven’t seen anything yet. More on DVDs and CDs later…

At Shinjiku, we visited Takashimaya… 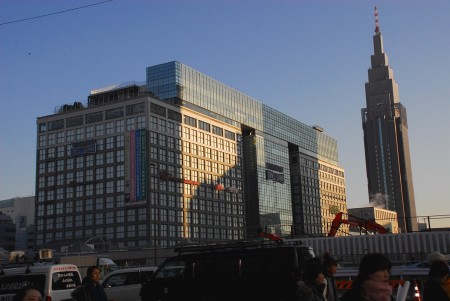 that also had a market place thingie.

and the flagship Kinokuniya store that was right next door to Takashimaya. 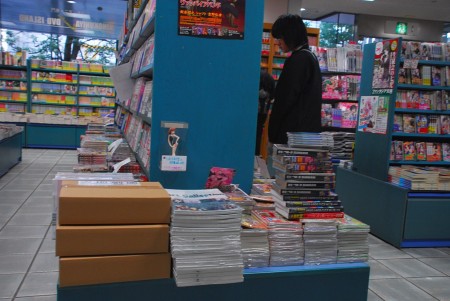 Manga and light novels galore, though we didn’t spend much time there, nor did we explore the entire building. Books and me don’t mix at all. I’m a fan of Modern VISUAL Culture for a reason. Besides, the only books that I were interested in like the Anime/Manga Light Novels and the Manga themselves were in Japanese.

The first highlight of today’s trip was Ikebukuro. After weaving through the maze of streets and streets of shops, we finally made it to Sunshine City (related to Sunshine Plaza by any chance?) after asking directions from at least 5 people.

Nothing much of note there… Just a regular mall.

By chance, after exiting Sunshine City, this was right in front of us:

What unbelievable luck. It’s Otome Road! To be completely truthful, I have no idea if it was or not, though, judging from the complete opposite of the gender ratio as usually seen at places like Akihabara, it probably was.

I visited 4 floors only:

First floor, mostly Magazines and snacks. When I say snacks, I mean Anime snacks. Everything from chips to chocolates had an Anime character slapped on the packaging. Nodame Cantabile Corn Chips? They got it. Wanted to buy the LS Choco Cornet Cookies that were featured on DC before, but forgot to add it to the final purchase in the end… (TT.TT) 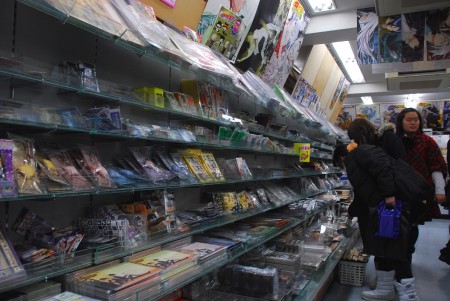 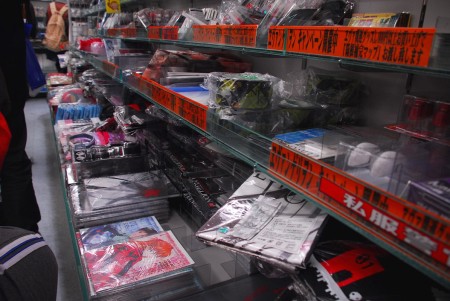 Key chains, mugs, posters, cospa stuff and more. The Nerve Clip Ear Plugs were so tempting, but weren’t practical at all since I listen to most of my music lying down. 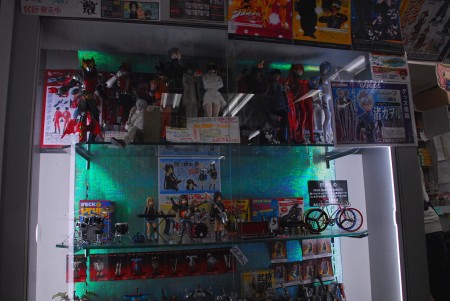 More of the same. Surprisingly enough, there weren’t any completed PVCs that were instant gets for me. This seems to be a trend with the whole trip in general. Action figures, Dolls, Mecha and Merch are the main targets this time round…

Amazing. Seeing all my favorite Anime in the flesh like K-On!, Kannagi, Eden of the East, Nanoha… the list goes on. Resisting the temptation to buy up the DVDs was crazy. CRAZY I TELL YOU!!!

Seriously, I had to constantly remind myself each time I picked up a DVD that it wouldn’t be worth it as:

1. I have already seen it.
2. There are no English Subs.
3, and most importantly, Too FREAKIN’ expensive! At an average of 6000-7000 yen for 3 episodes, my heart bled. I understand now the reason as to why the Anime industry is in a dire condition.
Ueno
4. I don’t have a Blu-Ray player, so that’s out of the question. 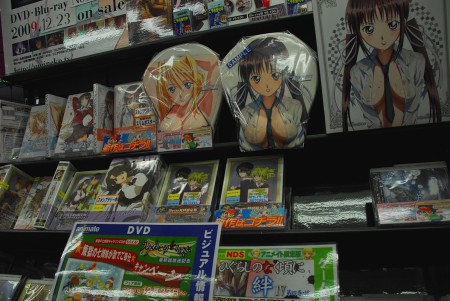 But the LE sets of the DVD releases were tempting due to the extras. Like I saw in HMV, Anime DVDs are great as they also contain some really epic extras! For instance, the Chaos;Head Vol. 4 DVD had a nendo puchi and the Death Note DVDs had gashapon quality figures of characters in each release.

I did eventually end up buying the LE release of the Sora no Otoshimono Vol. 1 DVD. The excellent animation, writing, character developement, style, screenplay, voice acting, casting decision, action scenes, comedic timing, music, colors, lines, tones and shading justified the purchace. The free Dakimakura cover of Ikaros had nothing to to do with it, I swear.

Considered getting the Lucky Star Concert DVD that was just released as well, but passed that in favor of the SnO DVD.

The exact same thing can be said for the CD Floor. Owning an official, physical product of one’s favorite Anime/Ani-Song would be epic. But once again, practicality made its way into the picture… with the advent of the .mp3, was CDs really worth it??? I could think of so many CDs that I could get. Mizuki Nana’s Eternal Blaze, World End, My Pace Diaoh, Happy Material, etc… etc… In the end, decided on Minori Chihara’s Paradise Lost.

‘Only My Railgun’ was the runner up, but I had already gotten a Railgun Wallscroll.

Before leaving, I decided to make a last ditch attempt at finding the LE set of the Negima Vol. 23 Manga which I have been searching for as stated in the previous posts. Already, Animate, Gamers, Toranoana and K-Books at Akihabara didn’t have any left.

The hallelujah chorus rang when they said that they had it in stock. And it was the last one. It was fate (not to be confused with the blond girl) I tell you, just like Sato and his figure. What a thing to experience in an Animate store. (^o^)

Initially planned to go to Ueno after Ikebukuro, but had to cut that part of the trip short as it was getting pretty late. So, off to TOKYO TOWER!!!

Getting off at the Hamamatsucho Station, the full glory of the Radiant Tokyo Tower was immediately in sight. See? We’ll be there in no time. 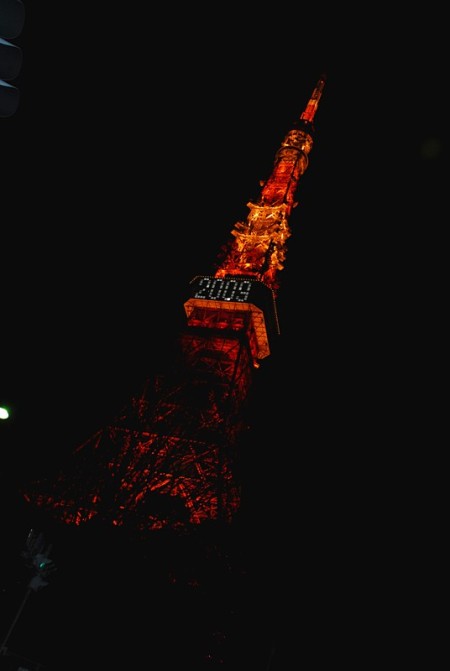 20 minutes later… Longest, Freaking, Walk, EVER. You’d think they’d put the station closer to one of the city’s main attractions.

The view from above however allowed us to forget about the pain in a flash. Simply breathtaking. To be finally at the tower where the climatic battle between Sakura and Yue occured, was unbelievable. The very same tower that Krauser raped… Yeah.

We only stuck around the observatory deck for awhile before heading back to the hotel. Yes, pain and fatigue will do that. The thought of the long walk back to the station didn’t help one bit.

Though I did see the infamous Oppai pudding on the way out. (^.^)

Now, I bet you are wondering what those coins in the title pic are… Before we left, I had to get myself a couple of what had to be the best souvenirs ever. Customizable Coins!!!

You had to buy a coin withe the design of your choice, then place it into a stamping machine to stamp the desired message on it. At 400 yen each, it was too hard to pass up. Yup, I had a coin made in honor of this series of posts. Awesome souvenirs are awesome. (^o^)

Lastly, had an authentic Japanese MOS Burger meal before we ended the day.

Again, a little note on the pictures. Did take a ton more, but due to the time I’m writing this review, only a few will be uploaded at this time. Like all the other days, videoed everything in great detail as well.

Now about Comiket… I had already asked Rin the same questions, but I’d thought I’ll post them here as well. The more input the better…

So, I supposed everyone has seen the epic figure previews that Comiket had to offer? Good? Now that we’re on the same page, the first day of Comiket has come and gone and I am honestly very worried for Comiket. I am fully aware of the massive scale of this event and I’m already overwhelmed. The queuing, the stress to get the items that I want first, so on and so forth.

First of all, I would like to say that I am actually more interested in the merchandising aspect of Comiket as opposed to the Doujin side (e.g. T2 Works), since I can’t read a shred of Japanese (…and I’m also ashamed to say that Doujins will be more or less available online later on…). Being a first-timer, I wouldn’t like to tire myself out too much and just go on the third day. Considering it’s 12:42 am as I am typing this, it would already be too late for me to do anything about the second day, which I heard is mostly Games/Touhou?

I do have a number of questions that I would like to ask. Will I miss out on a lot if I just go on the Third Day? Will I still be able to get the LE stuff that the industry booths put out? Indeed, Rin hit the nail on the head when he mentioned the Nanoha booth in his comment on my post. Having a vested interest in Nanoha, I would really love to get some Comiket only merch, going on the third day only, I fear that they will all be sold out… Here’s where my second question comes into play…

Where are the lines for the respective booths and how will I recognize them in the sea of Otaku? I’m afraid if I don’t make a bee-line for the appropriate booths, all will be lost. Thus, enter the Comiket Guide…

I have no idea how to interpret the maps that are given. I know that each picture in the main portion of the guide corresponds to a circle, but where each number corresponds to is beyond me. From what I have gathered, there are 3 different halls?

How are these halls connected?
Where do I enter from?
How can I orientate myself on the actual day and find out which hall is which?
Where does the Industry section fit in to all this?
How do I head there first?
Which line do I join?
Which booths will be giving away/selling LE stuff? Which would sell out first?

The lovely pictures of the figures are also from the GSC booth at the industry section? No chance of me acquiring the early-release Figma Reimu…

As you can tell from my strangely interrogation like tone, even though you are the one helping me (^.^;), I am completely dumbfounded. I really do hope anyone can answer as many questions that I have brought up in the message above. It would really help improve the Comiket Experience for a newbie like me.

Anyways, after touring the industry booths, I’ll head over to freely browse the Doujin section and Cosplay pavilion till I drop dead.

Plans for tomorrow include Budokan, Roppongi, Asakusa Jinja and more.

This entry was posted on Tuesday, December 29th, 2009 at 7:30 pm and is filed under Actar in Japan, Actar's Acquisitions, Actar's Life, Figures, Merch and Stuff. You can follow any responses to this entry through the RSS 2.0 feed. You can leave a response, or trackback from your own site.

18 Responses to Actar in Tokyo – Day 3: My Tokyo Tower in Otome Road