Just returned from seeing the much anticipated Live Action adaptation of Blood: The Last Vampire. Let me preface this by saying that I have seen a number of episodes of the Blood + Anime and the Original Animated Movie, Blood: The Last Vampire, which this movie is based upon. Was it any good? Well, let me give you a hint: NO.

Be warned, there will be spoilers ahead.

Now, I will try my best, during this review to give my personal opinions on this movie, not only as a fan of the franchise, but also as a normal movie goer. You may not agree with me, but these are my opinions and mine alone. During the course of this review, I’ll include screenshots of the live-action movie taken from the trailer and the Original Animated Movie.

Firstly, let me say what I liked about the movie.

Scenes from the Original Animated Movie:

The start of the Live Action Movie was exactly the same as the Original Animated Movie. Having the train scene at the beginning was a great way to instantly pull fans of the Anime into the movie and get them into that familiar world of the ‘Blood’ series.

A great casting choice. She played her role really well and looks sufficiently like the character she is supposed to portray. It is important to note that she looks great in a Sailor Uniform.

OniGen’s final appearance has her with all these sashes floating away from her. This design is really neat as it causes her to become much more imposing and menacing. Sadly, the same cannot be said for her character…

…and now comes the time for me to tell you what I didn’t like about the movie.

I went into the movie knowing full well that it wasn’t going to be a frame-by-frame Live Action adaptation of the Original Animated Movie. But really, I didn’t expect it to be this bad.

In the Original Animated Movie, the plot centered around the happenings of the Air Base. The small setting created a sense of isolation and claustrophobia that’s present in nearly all good horror movies. This adds to the sense of helplessness when the Chiroptera attack. We are given sufficient information about Saya and the Chiroptera to get into the story and appreciate all that goes on at the base.

The Live Action movie decided to explore Saya’s past and revealed a lot about her character. I personally feel that it just made Saya seem more vulnerable and weak than the cold hearted Chiroptera killer of the original. In the original, Saya’s character is shrouded in mystery. The effect is completely ruined in the Live Action Movie.

I don’t really know how to express this in words, but the feeling of the movie was completely different from the way the Original Animated Movie felt. 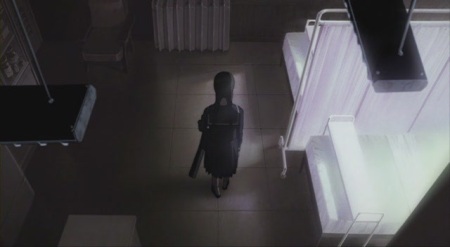 The atmosphere of the Animated Movie was bleak and suspenseful. This really played an important role in adding to the eerie factor that the movie aimed for. Overall, it really worked in it’s favor. The Live Action Movie however, was far more vibrant and much less frightening. This resulted in making the Chiroptera less scary and made their appearance have less impact on the audience.

The Chiroptera in the Original Animated Movie were really unique in the sense that they were terrifying and powerful. The build up to their first appearance was well done with the suspenseful atmosphere and eerie silence. When we finally get to see a hint of the Chiroptera, the juxtaposition of the huge fearful beast rearing it’s head in the form of a schoolgirl is simply priceless.

This scared the shit out of me.

Yawn... Haven't we seen this before?

We never did get to see the schoolgirls start to turn into their true form. They were pretty much killed in human form.

The design of the Animated Chiroptera was much more beastial and animalistic then their humanoid Live Action counterparts. Once again, this made the Chiroptera so much more menacing.

Last but not least, I observed that the Chiroptera were pussified in the Live Action Mo vie. The Animated Chiroptera were few in numbers, but were really fearsome. Each time one appeared, you knew that Saya had her work cut out for her. The Chiroptera were terribly strong and used their own bodies as weapons. The Movie turned the Chiroptera into cannon fodder. Hordes of them were killed off nearly instantly. Not only that, why were the Chiroptera using weapons and fighting in human form most of the time? The Animated Movie Chiropteras always fought in their true forms and kicked so much ass. They are MONSTERS! KILLING MACHINES for crying out loud.

The Original Animated Movie had Saya so much more kick-ass, hardcore and emotionless than the Saya of the Live Action adaptation. For reasons unknown, Saya in the Live Action movie decides to bond with a human character, Alice. I can understand why they decided to give Saya a friend as it allows Saya to show her human side. But seriously, being hundreds of years old, you’d think she’d be more detached.

Do note that this is not the Actress’s fault at all. It’s just the writing and direction of the movie.

I didn’t like the way in which the movie portrayed Saya at all. She was so much more vulnerable. Speaking of vulnerable, how the heck can Saya nearly die from a gunshot? That’s just wrong. She’s supposed to be able to withstand much more than that, considering the fact that she’s supposed to have regenerative abilities…

The most incredulous and annoying character in the entire movie. First off, she’s all hysterical about her classmate being beheaded by Saya, then after a huge battle with HORDES of Chiroptera and seeing her father die she’s all fine and dandy and decides to befriend Saya and help her in her quest.

Her facial expression when she said: ‘Through the Looking Glass’ at the end was just so fake and forced that I literally burst out laughing. Overacting at it’s best.

Screw Saya and her immortality. Alice is the one with power to never die. Not only does she survive the attacks by the Chiroptera, the Agency, falling from a ravine, she also manages to get out of a huge nuclear explosion caused by Onigen. Even when Onigen throws her to the ground, she happens to land in a pool of water. Amazing. Simply amazing.

They should have just stuck with the nurse character. So much more dynamic, believable and less annoying. Anyone else find it ironic that the Animated movie is more life-like than the Live Action one?

5. Onigen and the Final Battle:

Worst. Final. Battle. In. The. History. Of. Final. Battles. We have so much build up during the movie. Onigen was shown to be a really powerful demon with the ability to blow a man’s head open with just a wave of her hand. Throughout the movie, we see glimpses of her and we perceive her to be the ‘big boss’, sending out her minions for Saya to defeat before taking her on herself.

Yet, after all that, she’s dead within minutes without much of a fight. HUH??? Yup. Onigen wasn’t much a threat after all. She didn’t even manage to kill Alice, a human. As an all powerful demon, why must she fight with her sword again? We didn’t even get to see her true form.

Don’t even get me started on the horrendously cliched ‘I am your MOTHER’ Star Wars moment the end. I was cringing all the way through the end of the anti-climatic ‘final battle’.

Lastly, at least get an actor who can speak English properly. Seriously. You may think I’m joking, but it is nearly impossible to comprehend what Onigen is saying everytime she opens her mouth.

Action scenes were disappointing at best. Constant shifting of the camera angles combined with close up after close up shot was extremely disorienting and it really spoiled what could have been epic action sequences. The constant usage of slow-mo effects didn’t help one bit.

Nothing much to say other than the CGI in this movie was terrible. The Chiroptera appeared fake, glossy and out of place. The movements of the CGI Chiroptera was also very unnatural. I’m wasn’t expecting Industrial Lights and Magic Transformers quality CGI, but they could have done a much better job. The quality of the CGI was literally on par with a B-rated monster movie.

Not only was the blood in this movie completely CGI, the artificial blood was used in torrents. CG blood cascaded from every cut, slash and wound. Exceedingly exaggerated, unnatural and out of place.

One and a Half Hours. That’s WAY too short. But at the same time, WAY too long. Why? I can honestly say that this is the first movie I’ve ever seen in which I kept glancing at my handphone to see how long more the movie was going to last. That’s just sad.

To be fair, the movie was a good effort and I applaud them for trying to incorporate scenes from the original source material. In my opinion, the movie was indeed capable of so much more.

Now that is why live action adaptations of Animes should not be made. If a live action movie must be made, it must be executed well. One of the problems with Anime turn live action movies is that it has to please the hardcore fans and general movie going audiences as well. It’s the curse of adaptations. People will inevitably compare them to the originals.

Bad live action adaptations give audiences who are new to the franchise a bad impression of the original Anime. These people might not even know how epic or awesome the original is.

When all’s said and done, fans of the series and even casual movie goers would most likely not enjoy this movie. I wouldn’t even call it an entertaining movie… The only good parts were actually seeing bits from the Original Animated Move being translated on to the big screen. Really expected more from the produces of ‘Hero’ and ‘Crouching Tiger, Hidden Dragon’.

Save that money and go watch Transformers: Revenge of the Fallen. It’s going to be epic.

This entry was posted on Wednesday, June 10th, 2009 at 11:08 pm and is filed under Anime, Movie Reviews. You can follow any responses to this entry through the RSS 2.0 feed. You can leave a response, or trackback from your own site.