Now that my Midterm exam is over, it’s time to relax (for a little while), watch some Anime and get down to opening some of the figures that I haven’t had time for. Today it’s Alter’s take on the girl that’s shrouded in controversy, thanks to Kadokawa, Suzumiya Haruhi.

Unlike most figure reviews, I like showing off the box. Lots of work goes into designing these boxes and the designers are usually under appreciated. So, let’s take a moment to admire the box! (^.^)

The back of the box is similar to most. However, the design is very simple and yet pleasing. It’s also somewhat reminiscent of the OST Singles CD cover.

Anyways, here’s how Haruhi looks when she has been removed from her prison of plastic and cardboard. She is aslo slightly smaller than most 1/8 scale figures due to her pose. 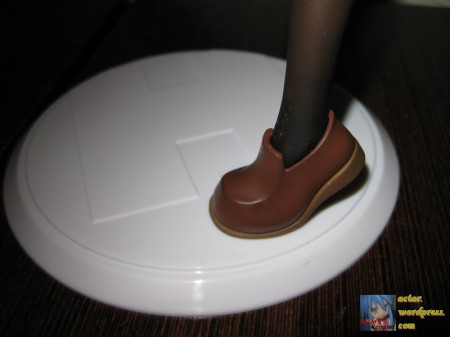 Sadly, Haruhi doesn’t come with any other accessories other than her base which has a molded ‘H’ on it. 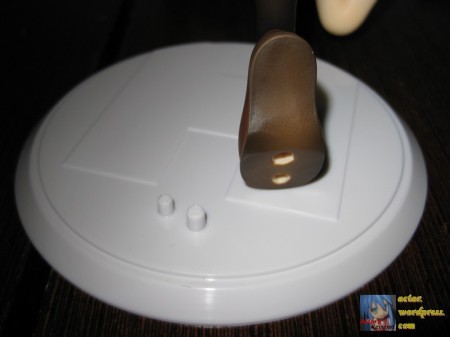 So the base pegs in to he foot via two pegs. I highly doubt the figure will lean as the leg seems to be made of sturdy ABS. The figure is pretty light in itself, so no worries!

Now, we come to my favourite portion of the review. The detailed shots. At this point, I usually try my best to take pictures that really capture the essence of the figure and make it as stylistic as possible. 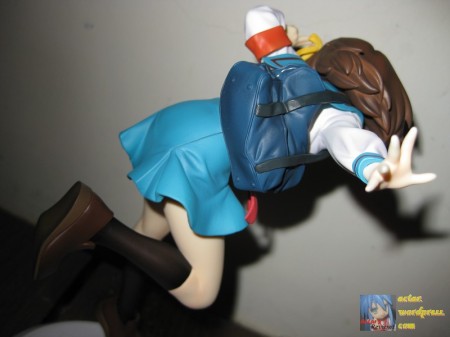 This time, Haruhi is in a running pose, saluting to someone. Perhaps Kyon. Speculating aside, the pose is exceedingly dynamic and very fresh. It is a far cry from the usual poses of Haruhi we see where she is pointing.

Details and painting are all top notch. Unsurprising, since this is an Alter figure. No flaws can be detected by me. Top scores in this aspect. 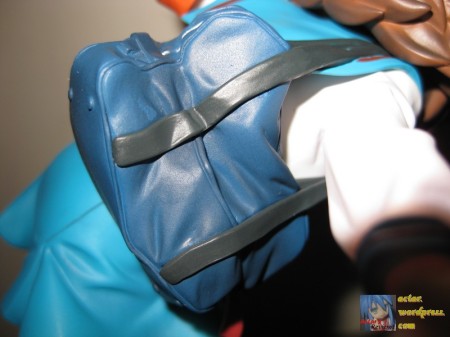 Even her school bag is wonderfully detailed. I do believe that this is the same bag that will be included with the Figmas that will be released in April.

Look closely and you’ll be able to see that the Dan-Cho armband is detailed as well.

In conclusion, this figure is just another awesome addition to the Haruhi Figure series. All in all, it’s much, much better than most of the other Haruhi Figures I’ve seen. She certainly deserves to be added to your collection.

You knew it was coming… (^.^) Lie the figure down and for some reason, she looks exceedingly natural in this pose as well. It’s as if the figure was sculpted with this in mind. Coincidence?

Before ending off, let me just quickly slip in some stuff I want to let you guys know about.

So that's what they stand for...

There are some more shows that I’m interested in from this season like Sora no Kakeru Shoujo and White Album. Not to mention, I have tons of stuff to catch up on and series I’m interested in. Tora Dora, Hyakkoa and Jigoku Shoujo Season 3 are series I’ve started but haven’t gotten around to finishing yet. So many other series I want to watch. Series like Kaze no Stigma and Eureka Seven have all been recommended and I will try to start them soon. 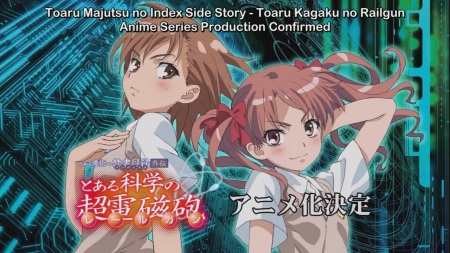 When Mikoto and Kuroko cross paths, the EPIC will begin.... If you know what I mean.

… and if you don’t see, Sankaku Complex (NSFW). Or one of the final scenes of the Anime. Yup, as can be seen above, the Biri Biri spin off has been announced and dated. I can’t be any happier. Mikoto is indeed a fantastic tsundere and she’s a level 5 psychic to boot, not to mention that she is my absolute favourite character from the series.

So, in spirit of the Anime’s announcement, I will be reivewing the Mikoto figure from Kotobukiya together with the Kuroko figure that is also released by Kotobukiya when she arrives at my door from HLJ.

This entry was posted on Friday, March 27th, 2009 at 3:09 pm and is filed under Figure Photo Reviews, Figures, Merch and Stuff. You can follow any responses to this entry through the RSS 2.0 feed. You can leave a response, or trackback from your own site.