Tama-chan, the cutest and moe-est girl in Bamboo Blade (awesome series… Season 2?) gets a second figure treatment. This figure is created by a company called ORGANIC. The first being created by Kotobukiya.

Not many people have heard of ORGANIC, nor is it that well known (as compared to Alter, GSC, Max Factory, etc…). That being said, it is not surprising that this figure was not widely publicised. I did not even know it existed until my local store had it up for pre-order. But that was wayyy back in April/May. After numerous delays, she’s finally here.

Back of the box.

However, the main question is, is the figure any good and how does it compare to the one produced by Kotobukiya? Let’s take a look see.

Here’s the figure all set up and displayed as it should be. As you can see, Tama~chan is on one leg, in a semi-walking pose, getting ready to head out the door. She is carrying her Shinai (Bamboo Blade used in Kendo) slung over her shoulder and her school bag on her back. What you can’t see in the above picture is that she is actually in the process of wearing one of her socks.

This is indeed a very interesting pose. Who would have thought that this natural pose would make lovely Tama~chan look all the more Kawaii.

Here are the two accessories that she comes with. One is her Shinai and the second accessory is the cat which is seen constantly throughout the series. I have to admit that it was surprising that they included the cat as they did not mention anything about it in any of the production photos. It is indeed pretty amusing and cute at the same time.

As for the Shinai, the longer side of the strap is flexible, allowing you to get both of the pegs into her hands while allowing the Shinai to be slung over her shoulder like so: 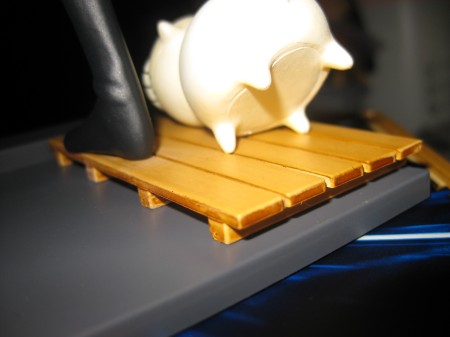 Something that grabs my attention is the base. One half of it is made to look like wooden flooring. The attention to detail is simply amazing and I absolutely love it. I am not sure if it is made of actual wood, but it does feel woodish.

Up till now, I have been pretty much saying good things about this figure. Unfortunately, I do have my fair share of complaints.

First of all, the legs of the figure are way to shiny. It almost seems like she is sweating. It does seem fine in the pictures, but it is a world of a difference if you see it in person. They are also much more pale than they appear in the pictures. The legs do have some traces of cast-lines, though I don’t mind them that much…

Next, the pose that she is in makes her look down at a pretty low angle. It is completely natural for her to be in that position. Sadly, the fact that she is facing down does not make her a fantastic display piece as you would have to place her on a high shelf so that you can see her face clearly.

Lastly, the price (and size). This figure is surprisingly small and light for a 6800 yen figure. Though I must admit that figures are getting more and more expensive these days…

I did choose this figure over the Kotobukiya one as this figure portrays Tama~chan from the Anime more accurately. There was just something about the face of Kotobukiya’s figure that I found unnatural.

Another reason as to why I picked this figure up is that she is wearing her school uniform. Both the Kotobukiya figure and the soon to be released Griffon Enterprise figure have her in her Kendo uniform.

Overall, ORGANIC’s Tamaki is a pretty good figure. If you like Bamboo Blade and Tama~chan (how can you not?) I do suggest you consider purchasing this figure. However, I would highly suggest getting Griffon Enterpirse’s version of Tama~chan when she is released in December as that looks to be another awesome Tamaki figure as well and frankly, looks better than both its predecessors in terms of accuracy and pose. (FYI, I already pre-ordered her.)

Time to have fun. Here are some interesting shots I think you’ll enjoy. 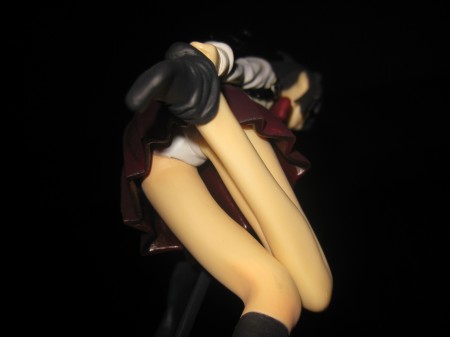 Notice how a simple shifting of your camera can improve your shots by 1941224 fold? Miraculous.

What could he be trying to achieve? 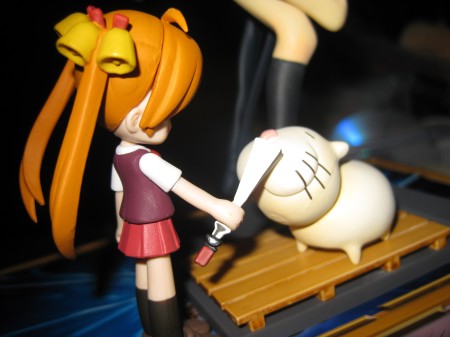 Good job, Asuna~san. That cat is an enemy to all women. :)

This entry was posted on Saturday, October 18th, 2008 at 4:44 pm and is filed under Figure Photo Reviews, Figures, Merch and Stuff. You can follow any responses to this entry through the RSS 2.0 feed. You can leave a response, or trackback from your own site.